Temporary exhibits are the most exciting part of any museum, in my opinion. It is within them that you can truly see a museum's value system and curator's perspective in the way in which they choose to situate a unique collection... of art, for example. Susan Power also attributes temporary exhibitions "to attract increasingly larger number of visitors." 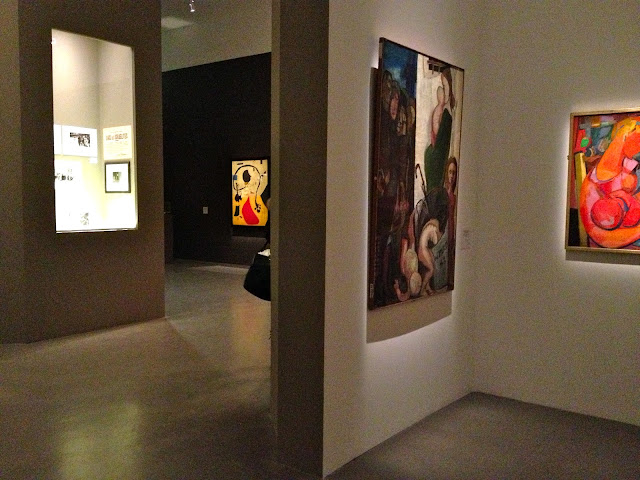 The current temporary exhibition at the MAM was certainly crowded during my visit last week. It showcased "over 400 works of art and documents created/displayed in France during the decade bracketing World War II . . . a crucial and tragic moment in the museum's history." The exhibition was organized chronologically, displaying pieces that had been visible at the time, in addition to those that were not. Lighting was low and very little description was given except for blocks of contextual text at the beginning of each section. For this reason I don't think I'd be able to appreciate the amazing juxtaposition of it all--which, I believe, is the most valuable part--had I not been on a guided tour. 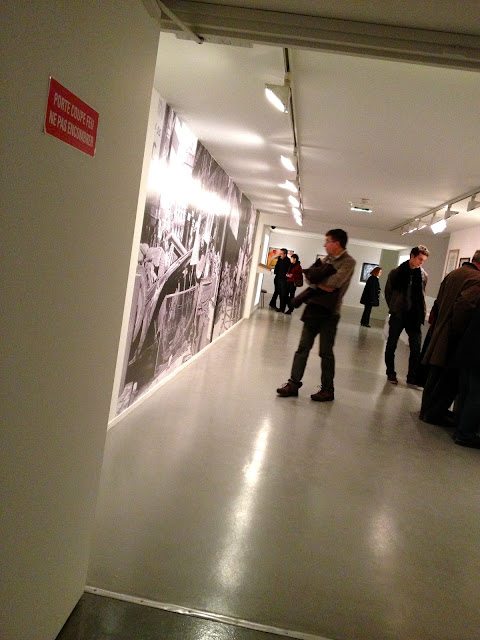 Each piece was so moving, not solely for its artistic composition but for its ideology.There were propaganda-like works for the Vichy government (stylistically of modern and medieval themes), pieces that served as acts of subtle resistance by artists in exile and those kept under lock and key (Picasso, for instance), classic facist art, and even those that had been created by artistically-inclined prisoners at the detention camps with the limited material available: 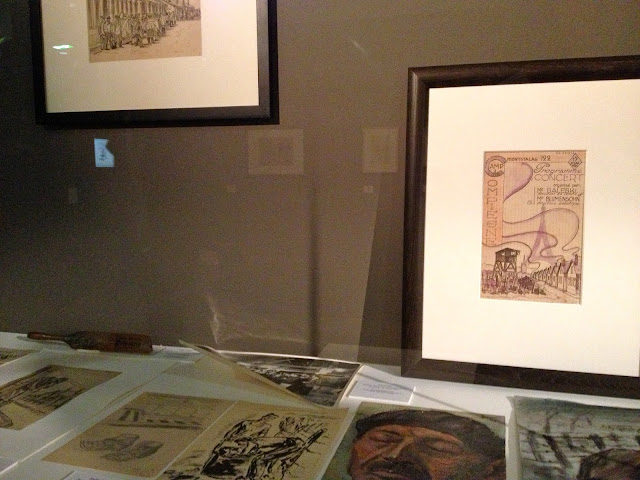 And it closed and ended with surrealist works; the first that had been displayed perhaps with an unconscious premonition of what's to come and the last with a conclusive return of artists to the scene, with the outstanding intention of performing a change on the visitor. The art, degenerate or not, intentionally (and unintentionally) expressed the most barbaric parts of the war. The exhibition thus professed a profoundly political and ethical narrative. 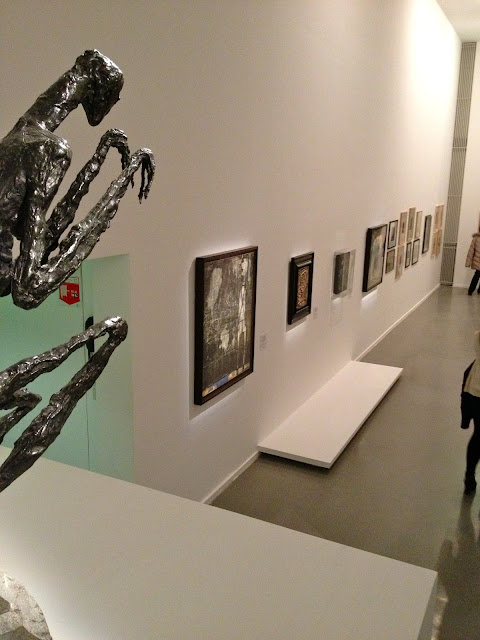 Imagine a museum, any museum... what do you see? Usually, a classical building filled with historically-relevant art of some kind or perhaps a modern space made up of interactive science exhibits. In France, amongst other Western European cities with extended imperial pasts, castles and/or palaces have also taken on the role of "the museum." 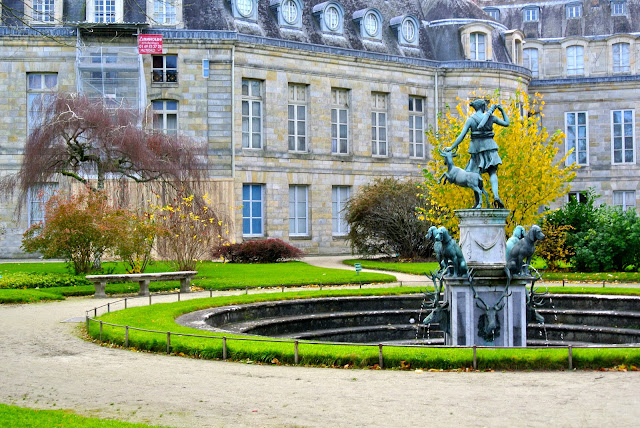 "The meanings that we attempt to attach to objects are dependent on historical context and the multiple collective memories that shape their reception," (Crane, 2011, p. 107). 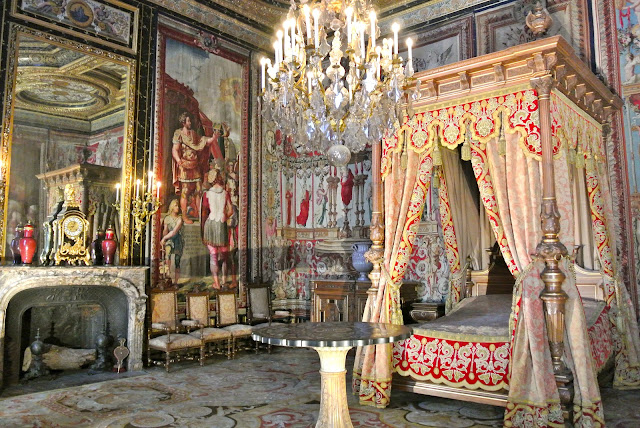 To a culture who so strongly values their "cultural" accomplishments, a castle or palace, hundreds and hundreds of years old, is the perfect place to literally set the scene. For a visitor, it also brings the museum experience to the next level. I was so pleased to have had the opportunity to visit le Château de Fontainebleau the weekend before last. 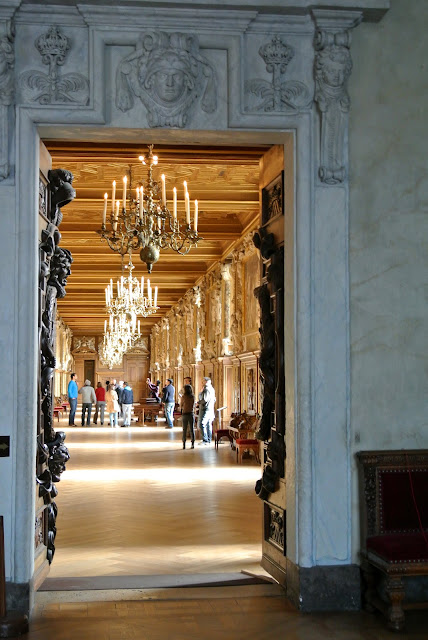 My mom and sister had the audio guide while I chose to wander through on my own. It's probably a bit embarrassing to admit, but I felt like I was on the set for The Three Muskateers or Marie Antoinette. 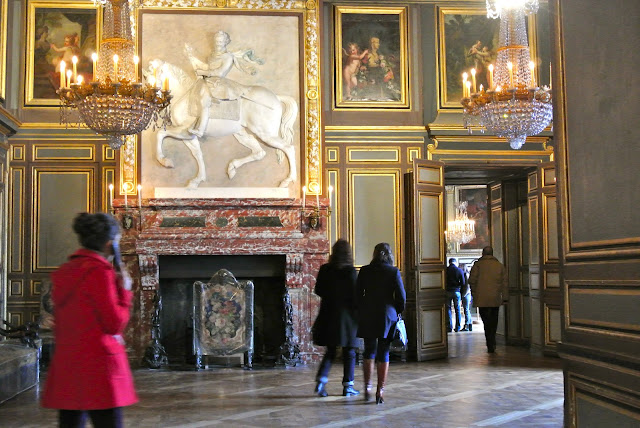 Not that I believe either were shot here, per se. Arguably more interesting (and most definitely more historically accurate) is the fact that le Château de Fontainebleau is one of the few in France that was consistently habituated, from the François I in the 16th century all the way to the reign of Napoleon III. 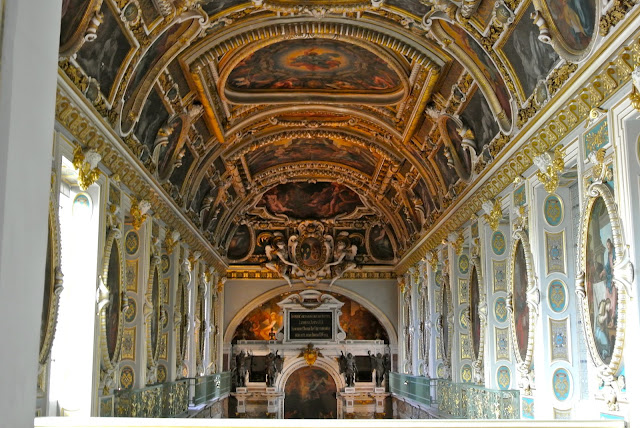 Indeed, "the material word," and I'd argue, world, "carries weight--aura, evidence, the passage of time, the signs of power through accumulation, authority, knowledge, and privilege," (Witcomb, 2007, p. 36). 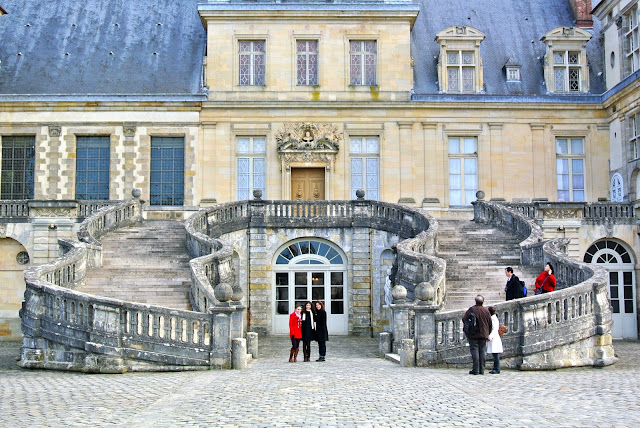 How to Visit a French Market

My family and I were fortunate enough to host a French exchange student in my last year of high school... and I've been fortunate enough to keep in touch with her, getting to know her sweet family in the process. During my mom and sister's visit, the six of us escaped the crowds of Paris for Fontainebleau. This charming Parisian suburb is known for its scenic forest--formally a favorite hunting ground of French kings and now a popular weekend getaway for all city-dwellers. I especially love it for its market though. It was my mom and sister's first visit to a French one. 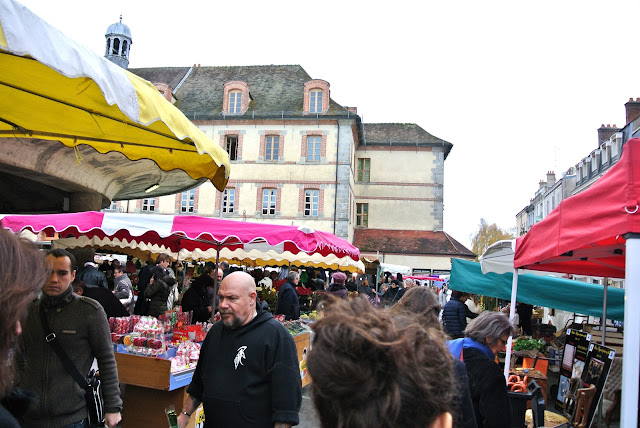 Crowds were bustling, vendors were shouting (occasionally), and English was nowhere to be heard on that Sunday morning. As it would be most others, I assume. In these way, markets are very much unlike museums. Very few of the products are preserved (e.g. fresh fruits and vegetables), there are no suggestions as to which route to take, and interaction with others is necessary. It occured to me then that "the market" I've come to appreciate might be an intimidating environment for my mom and sister, and any newcomer for that matter. I tried to guide them through with the best of my non-expert tips I've developed in the past few months... 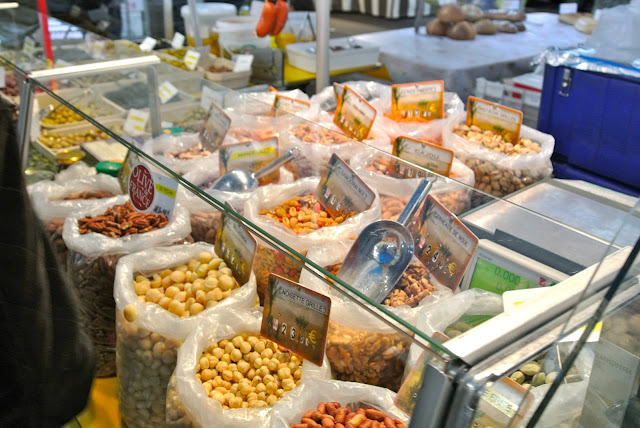 1. Bring more than one reusable tote, preferably a strong one. I've visited markets with "a list" but  always end up getting more than I bargained for (no pun intended). There's always a more diverse selection than expected. 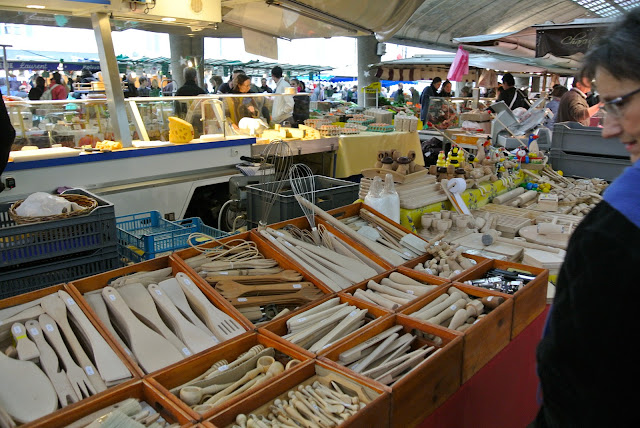 2. Have cash! (Perhaps this should have been my first tip.) Very few merchants accept credit cards. Thankfully, I've found most markets are close to at least one bank. Fontainebleau's, for instance, is in the city's center square. 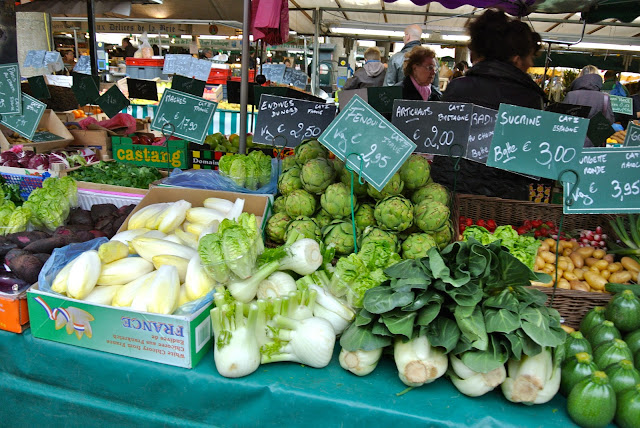 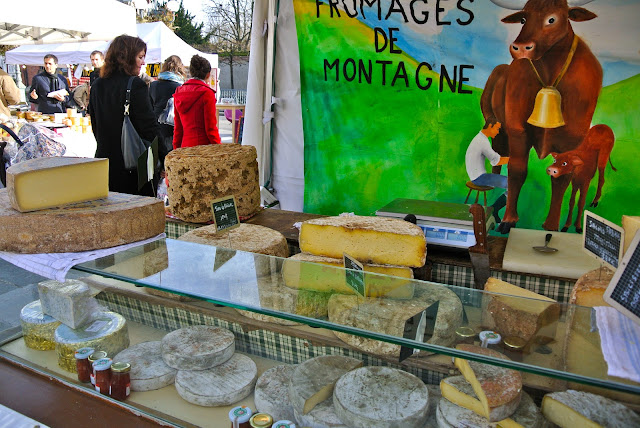 4. Ask questions. Market-vendors and -goers are probably part of the same community and I've found them to be both friendly and helpful when I thoughtfully practice my French. I doubt I'd be able to navigate my way through a cheese selection without, "Excusez-moi, comment est-ce le goût?" 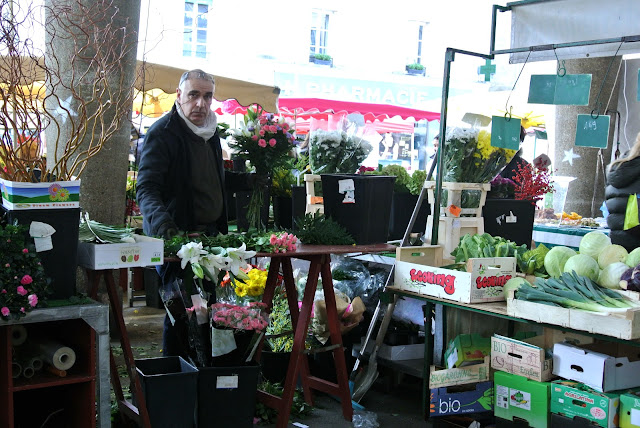 5. Do a lap before making any purchases. There is undoubtedly going to be more than one flower stand as well as one for every other kind of product so its nice to scope out quality and selection first. Lines are indicative of both. 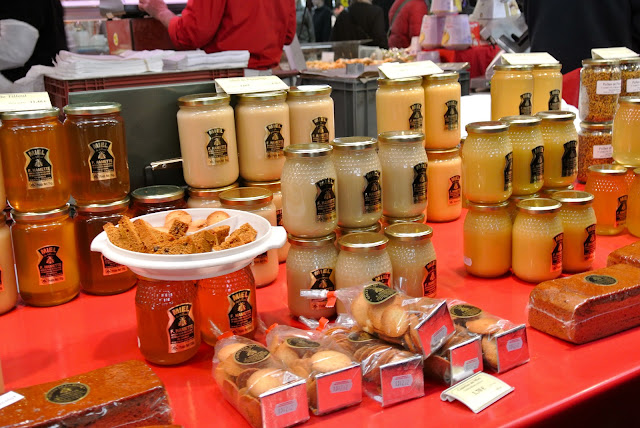 6. Enjoy samples if you can. Although pain d'épices is not my favorite, I was thrilled that myself, my mom, and my sister were able to try it the weekend before last. How festive. 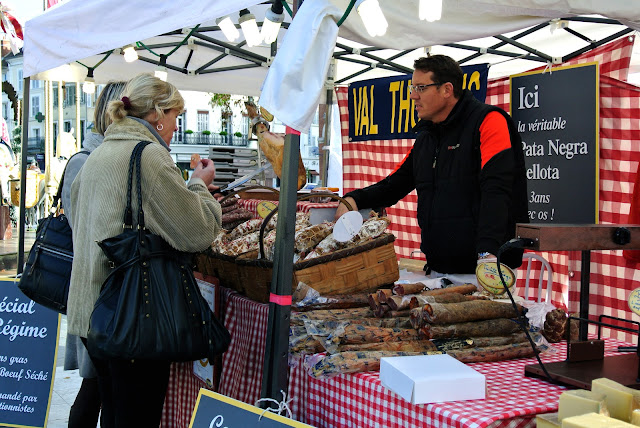 7. Observe the transactions. I've found that handling items, including fruits and vegetables, before purchase isn't often done in France... even if the baskets are within reach. Follow the example of the customers in front of you. 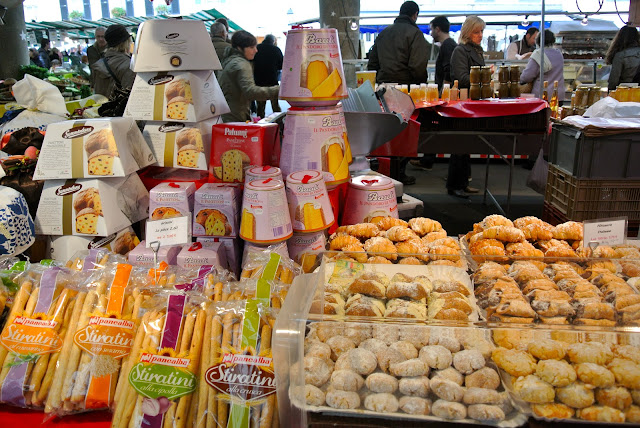 8. Expect seasonal. Freshly picked fruits and vegetables are the most readily available (and cheapest) so it'll be obvious what is in season in that sense. You may be surprised to find, however, that particular game, foul, fish, breads, pastries, and wine are only available at specific times of the year. The same goes for holiday treats; of course! Enjoy them while you can. 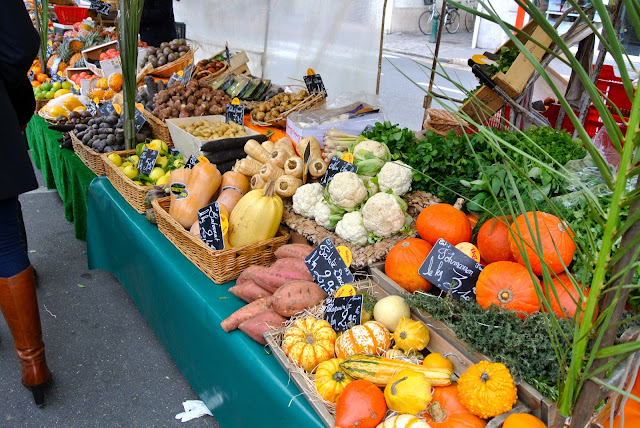